Emerging Infrastructure Capital is pleased to invite you to a Webinar featuring Temple University alumni leading experts in the energy sector, titled:

COVID-19 & the Future of Energy: Investment & Development in Emerging and Developed Markets

The session will feature the following Temple Alumni panelists and moderator: 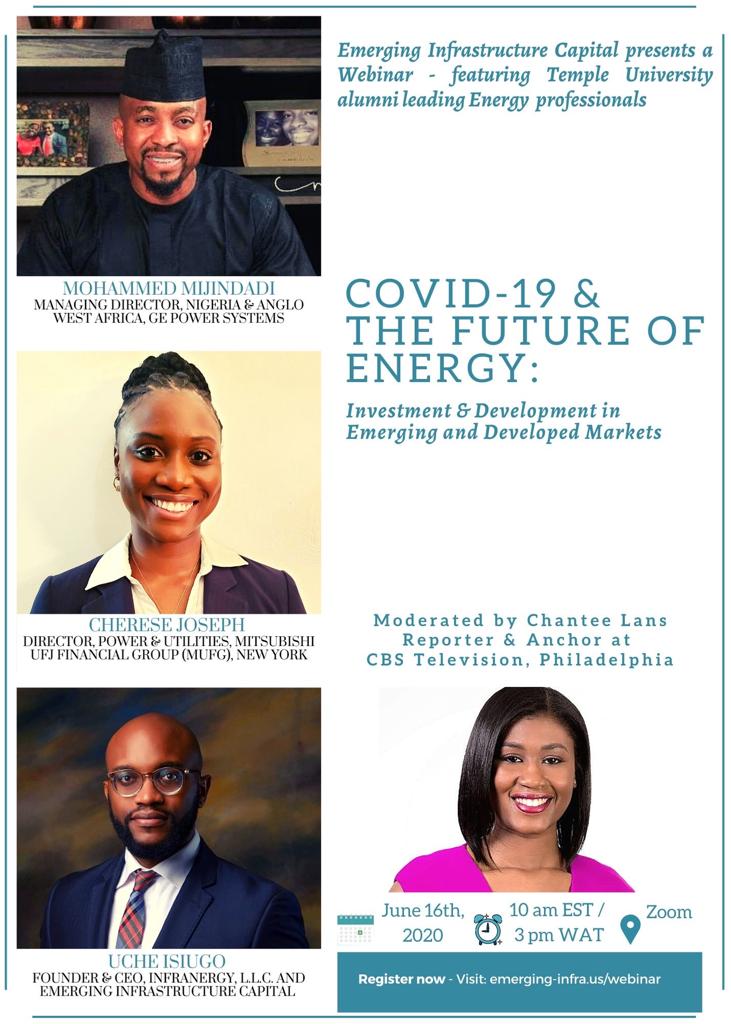 The period after COVID-19 will have economies that will be shaped by new habits and regulations. Are emerging and developed markets ready to meet the current opportunities and challenges of energy development and investments with the tectonic change? What roles do energy storage, solar PV, and gas-power technologies play in solving problems in a post-COVID-19 world?

Join us on this webinar as we discuss market developments and opportunities with Temple University alumni leading experts in the energy sector on Tuesday, June 16th, 2020 at 10 AM (EST) / 3 PM (WAT). Panelists will share perspectives on the longer-term impact of scaling the deployment of energy infrastructure beyond the current pandemic and how markets can strategize for quick wins in the space. 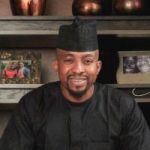 With GE’s strong presence in Africa and the Nigerian Power Industry, Mohammed has led the development and support on several heavy duty IPP and distributed power plants in Nigeria leading to significant MW’s added to the Nigerian national grid.

Prior to his appointment, Mohammed was the Regional Sales Director for GE Power Generation Products (PGP) in Africa and began his career with GE in the Transportation business as the Nigeria Country Leader. He has held several positions including Commercial Excellence Leader, Strategic Sourcing Leader and in Business Development, driving growth globally. Prior to joining GE, Mohammed worked in several US multinationals in the Transportation, Services, Construction and Entertainment industries.

Mohammed earned a Bachelor of Science degree (BSc.) in Civil Engineering from Temple University in Philadelphia and an M.B.A in Marketing and Strategic Leadership from Pennsylvania State University (Penn State) in State College, PA.

He was inducted into the Nigerian Leadership Initiative (NLI) in October 2011, Institute of Directors in January 2014 and serves on the Board of Directors for GE International Operations Nigeria, Free Trade Zones and the ‘Kid for Kid’ foundation. 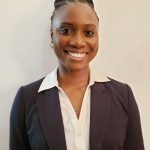 Cherese Joseph is a commercial banking Director at MUFG Bank (Mitsubishi UFJ Financial Group) in New York City. She has coverage over a ~$20Bn loan book, which primarily consists of Power & Utility clients across the United States, Canada, and Latin America.  She also covers some Metals & Mining and Midstream clients.

Cherese has over a decade of deal-based experience within banking and financial services.  Prior to joining MUFG, Cherese formerly held Credit Risk and Portfolio Management roles at BNP Paribas and The Royal Bank of Scotland, with a primary focus on Power & Utility and Industrials.

Cherese was born and raised in the Bronx, New York before moving to Philadelphia to attend Temple University in 2003.  While at Temple University, Cherese double majored in Finance and Risk Management & Insurance.  She graduated with her Bachelor’s of Business Administration in 2007 after which she moved back to New York and began her career within Standard & Poor’s Corporate & Government Ratings Division.  She later transitioned to banking in 2008.  Cherese received her Executive Masters of Business Administration from Columbia Business School in 2015 and is Series 79 & 63 Certified. 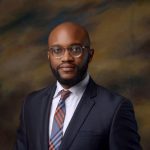 Uche Isiugo is the Founder  & CEO of InfraNergy LLC, a U.S energy developer operating in emerging markets, with a focus on West Africa. He has a track record in investments and deployment of Solar PV, Wind, Energy Storage projects.

Uche has had broad responsibility in commercial, asset management, project development and wholesale power marketing, previously as Director at Key Capture Energy, and prior to that, as Portfolio Manager at NextEra Energy. At NextEra, he was the Team Lead of the utility scale energy storage portfolio group. As a pioneer in commercializing energy storage, Uche managed the largest U.S. portfolio of battery storage projects (11 projects exceeding 140 MW) in deregulated markets at the time. Prior to his Lead role, he was in the Portfolio Project Finance group where he jointly managed an 11 GW portfolio of $10 billion Solar & Wind project finance, which garnered the Innovation Award. The portfolio included a variety of investor tax equity, back leverage and construction loan structures.

Prior to joining NextEra Energy, Uche worked in several U.S. Fortune 50 companies, including Citigroup, Boeing and Chevron. Uche is an Adjunct Professor at Florida Atlantic University where he teaches Mergers & Acquisitions in the MBA Program.

Mitsubishi UFJ Financial Group (MUFG) is the 5th largest financial group in the world with total assets of over $2.4 trillion (as ranked by SNL Financial, April 2016) and 140,000 colleagues in nearly 50 countries.MUFG as one of the world’s biggest banks, also owns 24% of Wall Street lender Morgan Stanley. A leading global financial group backed by 2,700 locations in over 50 countries and regions, MUFG offers comprehensive and tailored financial solutions to our clients worldwide. MUFG, in 2019, earned the top spot for global Lead Arranger in financing clean-energy and energy-smart technologies. The ranking, released as part of Bloomberg's annual New Energy Finance league table, placed MUFG as No. 1 among private sector banks for the third consecutive year. One of the world's leading financial institutions, MUFG has a strong history as a Lead Arranger among private sector banks, claiming the top spot in the Bloomberg rankings for seven of the past nine years and leading all lenders (public and private) in 2013. In 2018, MUFG financed 59 projects for a total of $3.94 billion in credits and a market share of 5.78%.

GE Power builds the power generation technologies we depend on today and creates the energy technologies of the future. Our innovative solutions and digital offerings help make power more affordable, reliable, accessible, and sustainable. GE Power is a world energy leader providing equipment, solutions and services across the energy value chain from generation to consumption. Operating in more than 180 countries, our technology produces a third of the world’s electricity, equips 90% of power transmission utilities worldwide, and our software manages more than 40% of the world’s energy.